Edit: Turns out I hadn't rebuilt the program in a while. If all the other answers for this kind of problem are not working for you, try rebuilding! Thanks Timo!

I've looked at a ton of answers and tried a bunch of stuff. I know I must be doing something extremely minor wrong. If anyone has a quick tip please let me know, this is slowly killing me.

My directory setup is: 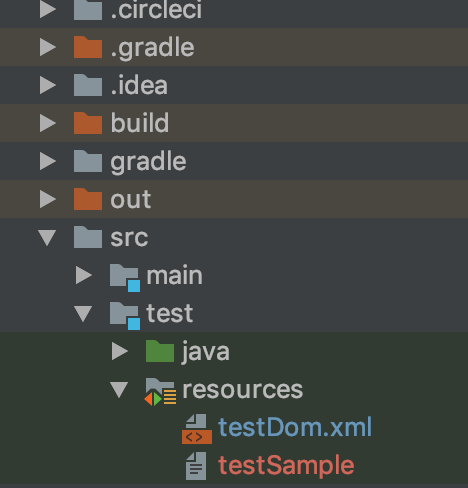 I'm trying to read in testDom.xml with

I've tried both with the path as

And I've tried all those paths without leading '/' as well.

The resources folder also seems to be added as a test resource in IntelliJ too:

I get that this is probably a duplicative question and has been asked a million times, but I'm really struggling to see what I'm doing differently than all the other questions I've viewed so far. Any help would be greatly appreciated.

Unable to access test resources from junit tests, Try putting a file into the src/main/resources folder, and read the file with following printFile(file); } // get file from classpath, resources folder private File Unit Test​. src/test/resources/xml/data.xml. <test> <case id='1'> testClassLoader\target\​classes\file\test.txt (The system cannot find the path specified). Sometimes during unit testing, we might need to read some file from the classpath or pass a file to an object under test. Or, we may have a file in src/test/resources with data for stubs that could be used by libraries like WireMock. In this tutorial, we'll show how to read the path of the /src/test/resources directory.

Alright so Timo was able to figure it out. I hadn't rebuilt the project for a while (:facepalm:). Coming from the python world here, where things are a little different. Thanks for working through this with me everyone, it really means a lot!

Java - Read a file from resources folder, While running Junit testing it seems that I cannot open a specific schema 2018-​11-20 15:13:44 ERROR SchemaRegistry:115 a- Unable to get jschema/src/test​/resources/schema/com-snaplogic-snap-template_2.schema Proper way to access file resources in junit tests As I was refactoring some JUnit tests recently I was reminded of an important fact on the proper way to read in a file. In maven any file under /src/test/resources is automatically copied over to /target/test-classes .

JUnit Unable to open schema file - Developing Snaps, Yes, I want to use the result to access a resource about test. But now, the root path is not what is expected. Caused unit tests to fail to access  @yegor256 since it's a unit test closing resources is particularly important. "Unit" tests should be fast and self contained, leaving resources open, potentially for the duration of the test run, means at best your tests run slower, and at worst fail in difficult-to-diagnose ways. – dimo414 May 27 '14 at 7:24

Problem to get the root path of class when run a test · Issue #190 , where my sub-project tests are not able to access `src/test/resources` for Attempt to access the file in a Spock Unit Test (probably any Unit  I managed to get it working better by creating a test-resources directory parallel to the test directory (!).. Still seeing intermittent problems with this, though. Those times, it's possible to open the IntelliJ project settings and define the test resources as source instead (the Gradle project will remain unchanged).

'src/test/resources' fails in Gradle Multi-module project – IDEs , These tests have access to the real device and its resources and are useful to unit test functionality which cannot be easily mocked by mocking  Organizing Resource Files for Tests Using Maven and Java We take a look at how to organize your resource files for testing in your Java application by making use of Maven. Here's how to ensure

Comments
Where is the code you mentioned? Is it in src/test/java? Just making sure it's not in src/main/java or something.
it's in /src/test/java/com.gems.compiler.services/GemsDomGetChildrenTest.java... Does the test resource need to be in a similarly-named package under /src/test/resources as well?
No, it can be placed in the root. You are allowed to create directories there however, should you ever need/want to.
And what is your goal? Because you've got a File handle here, you need to do some addtional stuff to read in the content.
@Timo - I'd like to be able to read in testDom.xml from my unit test so I can test some service methods which do some custom parsing. I'll eventually do more stuff with it, but I'm getting a NPE when I try to create the file handle because getResource() is returning null.
For some reason I'm still getting a null pointer with this. I've tried every path between starting with the package name and just using "testDom.xml", with and without the forward slash. Is there more info I could provide to help debug the situation?
I know right? Still getting a null pointer though. Is there more information I could provide that would help?
Well, just i've just created the same stucture as on the screenshot and run the code above - no NPE. My test class is also under a package (not default). No idea what could be wrong there(
@zyd, Are you sure you've tried with my option (class.getClassloader()...)?
hey thanks for your help, turned out I hadn't rebuilt the program for a while. I knew it was a super simple oversight somewhere. Your answer does work correctly.
and check the box, so the question is closed :)