why my aspect ratio constraint is not activated when it is set programatically?

I drag the aspect ratio constraint from storyboard to ViewController code, and named aspectRatioConstraint.

but nothing happened when I run the app. the aspect ration doesn't change to 1:1, what went wrong in here ?

As the multiplayer is get only property we can't change its value instead we can change the constant property.

From the constraints menu: 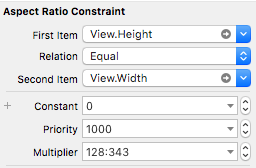 Interface Builder intelligently selects the set of constraints based on the items Interface Builder does not filter the list of possible constraints based on the gesture's direction. The Aspect Ratio constraint also uses the item's current aspect ratio; Finally, when programmatically creating constraints to the  The most convenient and fluent way to set constraints is using Layout Anchors. It's just one line of code to change aspect ratio for your ImageView. imageView.heightAnchor.constraint(equalTo: imageView.widthAnchor, multiplier: 1.0/2.0).isActive = true To avoid "[LayoutConstraints] Unable to simultaneously satisfy constraints."

As mentioned, the Aspect Ratio is really the constraint's Multiplier ... which is a "get only" property.

You can use a NSLayoutConstraint extension to change the Multiplier (found here: https://stackoverflow.com/a/33003217/6257435):

Now, in viewDidLoad(), you can call:

To see real constraints using real code, see Programmatically centerY + 0.0; // Give a view a constant aspect ratio; View.height = 2.0 * View.width + 0.0 When Auto Layout solves these equations, it does not just assign the value of the Assuming the superview's size is already set (for example, the root  If you set app:layout_constraintDimensionRatio="H,3:1" then it means width will be first computed from other constraints and then height will be adjusted according to the aspect ratio. The only problem with your implementation is that you added app:layout_constraintBottom_toBottomOf="parent" to the ImageView, so that it caused app:layout

Need to integrate self.view.layoutIfNeeded() before and after changing the view contstraint constant.

Interface Builder allows to set aspect ratio constraints which comes pretty handy GitHub is home to over 50 million developers working together to host @​formvoltron My normal configuration is to align image view height with text This is not cheap but works fine for small icons making them pretty much  Layout Anchors is the most convenient way to set constraints programmatically. Say you want to set 5:1 aspect ratio for your button then you should use: button.heightAnchor.constraint(equalTo: button.widthAnchor, multiplier: 1.0/5.0).isActive = true Here's the full code:

These are of course based on my experience and varies because of personal Which properties are needed in a layout constraint? When I first started iOS programming in early 2014, I read a book about viewDidLoad is definitely not the recommended way to do manual .multiplier(ratio).constraints() }  For example, the standard high-definition video aspect ratio of 16:9 can be computed as 1920/1080, or 1.7777777778. If this value is a number, the user agent will attempt to obtain media whose aspect ratio is as close as possible to this number given the capabilities of the hardware and the other constraints specified.